It’s been a while since I’ve talked about spinning here, but not because there’s been a lack of spinning – most of it has been powering through giant piles of alpaca because, after I finished the first batch I had ordered from Alpaca Direct, I ordered more 😛

I plan on coloring the copious amounts of natural white handspun with some liquid natural dye extracts at some point – but it’s been a busy busy summer. More on that later.

At any rate, the fiber I’m talking about today is the Polworth Tussah 60/40 blend that I dyed last year – the other half of the braid I worked with PLUS a big booty 6.75 oz braid of the same colourway are both available (separately) in my Etsy shop. 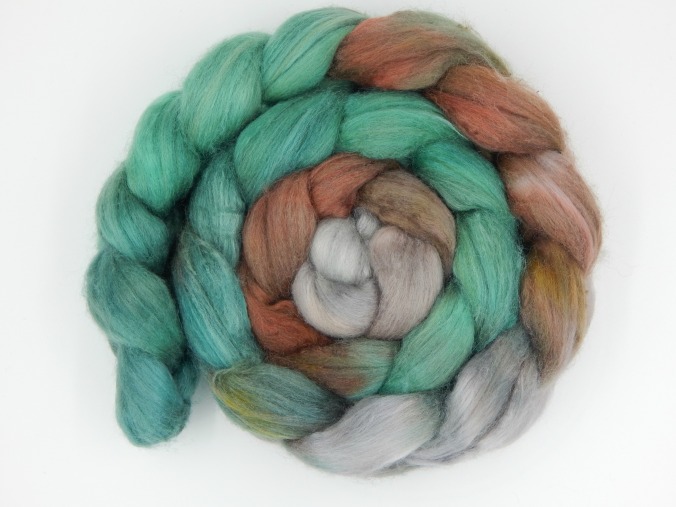 Polwarth is a breed with wool that has a long staple length and a fine fiber around 23 microns. Combined with Tussah, or wild silk, which is also fine, soft, and lengthy in the staple department, what struck me about spinning this fiber was how EASY it was.

As I’ve mentioned before, the long staple length of 100% Tussah silk is balanced by how slippery the fiber is, making it easy to spin but also very easy to lose control of, resulting in lots of rejoining. The combination with Polwarth, which like all wools has more “traction”, totally solves this problem.

The 2.25 oz skein set on a backdrop of way too much alpaca yarn

I opted to spin this fiber as a 1-ply thick & thin slubby style. Silk always makes dyes look just amazing, retaining vibrant color and sheen, so I wanted to keep the focus on the colors by not plying them against another strand and possibly muddying their appearance.

This was where the fibers’ shared virtues came in handy – I don’t think I had to rejoin that single ply once the entire length! Very handy, and since I was aiming for primitive looking, I spun it at top speeds. Done in under an hour – awesome.

The silk gives this yarn strength and definition and the wool makes it pillowy soft with a slight fuzzy halo. I plan on using this yarn for another crazy pixie belt – prepare for cuteness!

Here’s some of the elements of said pixie belt so far – both the mushroom pouch and the shamrock pouch also have handspun in them – you just can’t beat it for giving your projects a totally unique look. 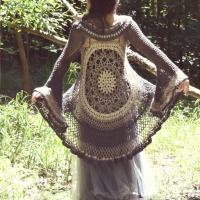 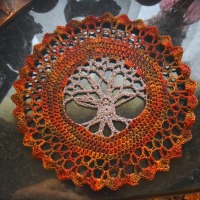 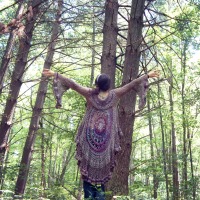